Ethiopia is a country located in the North Eastern part of Africa in the Region of Red Sea and Gulf of Aden. It is an old nation having a long history of more than 3000 years. This is evidenced by the prevalence of centuries old monuments, buildings, churches, monasteries and mosques, which are quaint and unique.

Ethiopia is also known as being the cradle of humankind – the world’s earliest known hominid ‘Lucy’ or ‘Dinknesh’ meaning “thou art wonderful” discovered in 1974 believed to be our common ancestor. This important archeological finding combined with many other prehistoric discoveries including the Stone Age tools up to 1.7 million years old and vibrant cave paintings bears testimony to Ethiopia’s remarkable antiquity.

Ethiopia’s history is woven with fascinating facts and legends: the visit of Ethiopia’s Queen of Sheba (Makida as known locally) to Israel to meet King Solomon, the journey of the Ark of the Covenant which is now rested in Axum and the Axumite Kingdom and much more are of great interest to the discerning traveler.

While traveling in the country, you will discover a beautiful and magnificent scenery, a variety of landscapes – green valleys, bottomless abyss, fertile plateaus, rugged terrains, natural forests, lakes and steams, waterfalls (where the Blue Nile Fall is one of the greatest attractions) caves and truly Wild National Parks – sheltering 277 mammal species, of which 6 are endemic to Ethiopia.

Because of the fact that Ethiopia has a number of diverse habitats, there is unbelievably vast number of bird species amounting to 862 from which 16 are endemic. And of the ten bird families endemic to the African main land, 8 are represented in Ethiopia.

This really makes Ethiopia the birdwatchers’ paradise. Having an immense cultural wealth, Ethiopia is known as a country of mosaic of cultures. 83 languages and 200 dialects are spoken throughout the country.

You find harmony in diversity among the peoples of Ethiopia – all having their own ways of clothing, hair styles, songs, dances and arts, all unique in their own way.

In addition, they have unique faith, food calendar way of time counting and unique alphabet. The festivals of Ethiopia are also colorful, fascinating and are all year round.

Both traditional and religious festivals are celebrated by its diverse ethnic groups with their picturesque native lives in their most rustic settings.

To mention a few – Meskel (the celebration of the finding of the true cross held every September 27th) and Timket (the Ethiopian Epiphany held ever January 19th).

The other colorful and engaging cultural phenomena are the Ethiopian coffee ceremony, held either in individual homes or hotels that makes your visit to Ethiopia unforgettable.

Debre Damo is the oldest monastery of the nation

Ethiopia has a diverse mix of ethnic and linguistic backgrounds. It is a country with more than 80 different ethnic groups each with its own language, culture, custom and tradition. One of the most significant areas of Ethiopian culture is its literature, which is represented predominantly by its ancient language Ge'ez from which modern Amharic and Tigrigna languages are derived.

To the south lies, what literally called the Omo Valley past the Rift Valley. This region is home to unique and diverse tribes which is point of attraction. Body paiting and coloration, body scarification and Art; lip-platting and hair stayles are the unusual experiences of travelers in the region by the people of the Surma, Mursi, Hamer, karo, Ari, Benna, Bume and Erbore and much more... 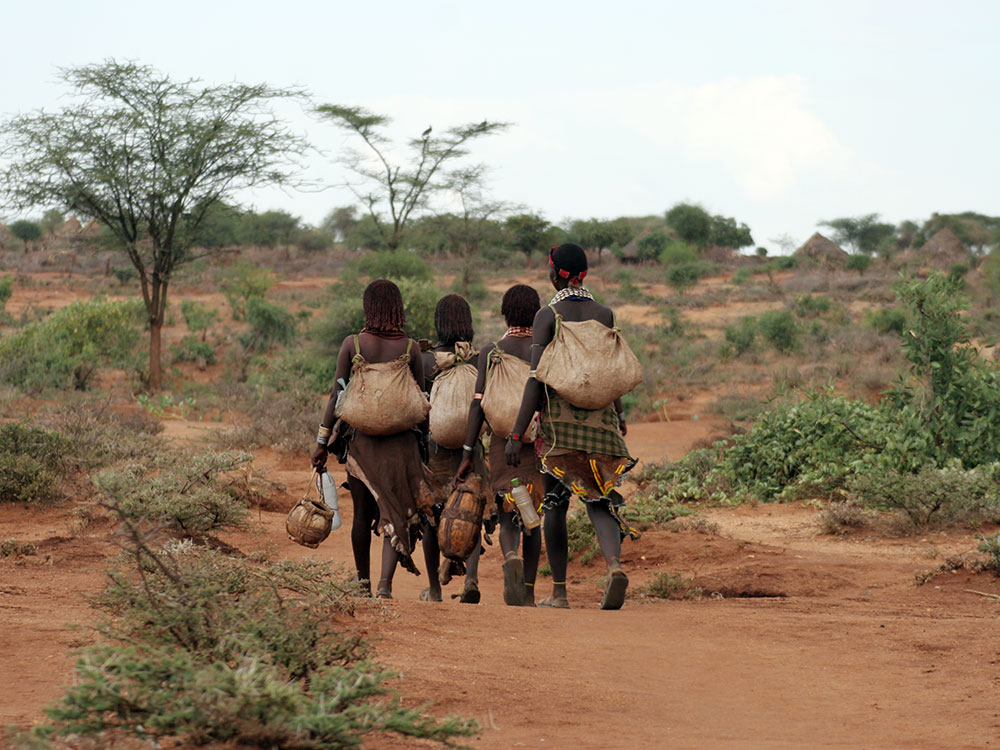 Omo National Park, located in the south-west on the west bank of Omo River, is 870km south-west of Addis Ababa. It is one of the most beautiful national parks in Ethiopia.

Unlike the bad image Ethiopia has, a major part of the country enjoys a great deal of greenness and spectacular scenery.

Travelers would experience a great deal of geographical contrast with in the territory of Ethiopia. Big mountains ranging to more than 4,600 meters are the realities in most of the northern part of the country which literally is even named the highland area. The 4th highest mountains in the continent of Africa, Ras Dashen is located in this area.

To the North-east of Ethiopia, in a region called Afar, one would end up in the lowest level of the country which is less than 116Meters below sea level by the name Dallol. The same region is the right place for adventures looking for unique topography and it hoists different salt lakes and the famed active volcano of Erta’ale. 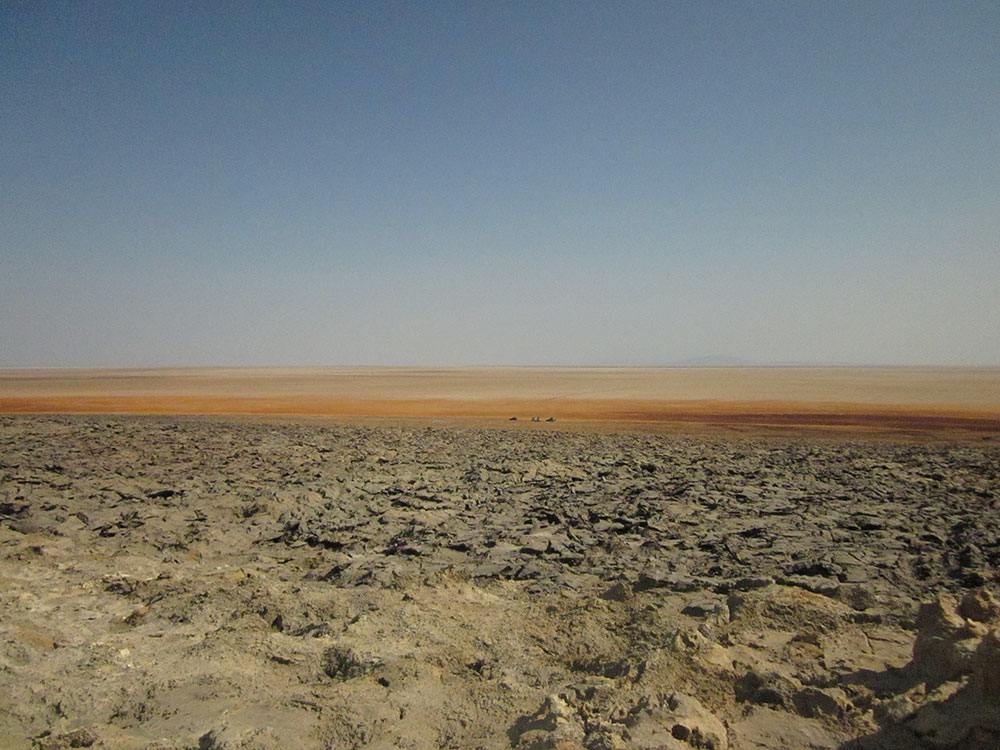 The Denakil or Dalol Depression is one of the earth’s hottest and most inhospitable places. It’s more than 100 mts below sea level which makes it the lowest place of our planet. At noon-time, temperature soars to above 500C.

The southern part of the country is also home to different rift Valley lakes with great views over them. The same region also has some of the 9 National Parks in the country. Among them, bale Mountain national Park to the South-East is paradise of endemicity for both fauna and flora. Also the second highest mountain in the country is located in this park. The Semien Mountains are a must for all those interested in wildlife, scenery and spectacular landscapes; the Park has been declared a World Heritage Site by UNESCO.

The region includes many summits above 4000 meters in the highest point in Ethiopia, Ras Dashen, at 4620 meters, the fourth highest mountain in Africa.

Ethiopia is old beyond imagination, dating to the very beginning of mankind. It is also the land of the Queen of Sheba, a place of legendary rulers, fabulous kingdoms and ancient mysteries.

Ethiopia, the oldest independent nation in Africa, has a heritage dating back to the first century AD. Traders from Greece, Rome, Persia and Egypt knew of the riches of what is now Ethiopia, and by the first century AD, Axum was the capital of a great empire. This realm became one of the first Christian lands of Africa.

It was in the 16th Century that the son of the great explorer Vasco Da Gama came to Ethiopia. He found a land of many kingdoms and provinces beset by feuds and war.

The first persecuted followers of Prophet Mohammed have been well-looked after by the 6th century Ethiopian Christian King and that is where the colorful amalgamation of the people and religion lies in Ethiopia. To the present day, the persecuted Muslim settlement serves as a major Mosque by the name Negash referring to the governor name of the province in that period.

Though very little practiced, Judaism is one of the very early religions to step in to the country as a belief. Presently few Juish people lead their own way of life few Kilometers from Gondar as many have been transported in the two Operations of Mosses and Solomon to the promised land of Israel.

The Blue Nile, longest river and shelter for many countries in Africa makes the biggest lake in the country by the name, Lake Tana. This lake is home to more than 20 churches and monasteries that date back to the 14th century. Blue Nile has also a very spectacular falls by the name Tis-Issat (meaning smoking fire) and was admired by the first Scottish traveler James Bruce in the 18th century.

In the 19th Century, under the leadership of the great Emperor Menelik, the country's passage to modernization began.

Addis Ababa (meaning the New Flower), being the last point of civilized and centralized city has a lot to offer in terms of historical attributes. There are many churches with good paintings and hosting the body of great Emperors of the past.

There are museums which exhibit the past with their artifacts and paintings. Much more, as a political center, Addis Ababa is very historical as it abode the head quarter of the then Organization of African Unity and present African Union. It is decorated with two false doors at the base, and decorations resembling windows on all sides. The "obelisk" ends in a semicircular top part, which used to be enclosed by metal frames. 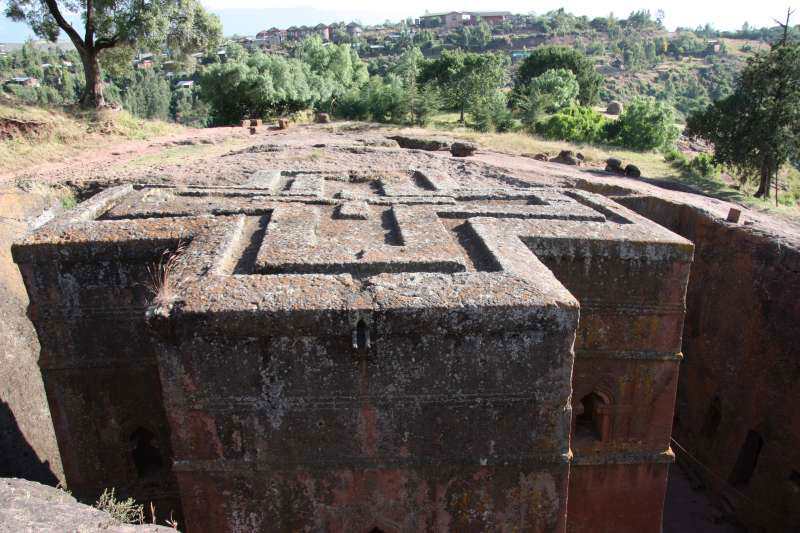 Lalibela is a town in northern Ethiopia, known for its monolithic churches. Lalibela is one of Ethiopia's holiest cities, second only to Akum, and is a center of pilgrimage for much of the country.

Unlike Akum, the population of Lalibela is almost completely Ethiopian Orthodox Christian. The layout and names of the major buildings in Lalibela are widely accepted, especially by the local clergy, to be a symbolic representation of Jerusalem.

This has led some experts to date the current form of its famous churches to the years following the capture of Jerusalem in 1187 by the Muslim soldier Saladin.

Harar has been recognized by Unesco as 'an inland urban settlement with a distinct architectural character and social organization, which cannot be compared to any other town in East Africa.'

The old medieval walled city of Harar once had its own local currency, and still has its own unique language.